It is clear that Emissions legislation is the main global driver for nearly all vehicle based, propulsion technology developments. Over the last 30 or so years, advances in technology around the internal combustion engine, along with its control and after treatment system have provided significant reductions in harmful gaseous and particle-based pollutants.


In the current climate though, what has been achieved is not enough. Also, due to recent bad publicity around how engine emissions were being characterised and communicated by some vehicle OEMs (Original Equipment Manufacturers), particularly with respect to diesel engine emissions. The combustion engine has become somewhat “unfashionable” – and the “on trend” topic for powertrain system development is “Electrification”.
It should be stated at this point what this actually means – There has always been electrification required for the powertrain – at the most basic level to provide ignition energy – and to operate and control the engine and accessories. However, this term relates more to the context of electrical propulsion – either fully or partly in combination with a combustion engine. Generally, this terms refers to electrical assistance but also energy recovery from non-propulsive systems – for example, brakes and suspension. Or electrically operated systems to reduce parasitic losses.
It is an extensive topic – therefore this blog post focuses on propulsive electrification, that involves traction drive and energy storage to replace or assist the conventional IC engine based powertrain. In this blog we will review the typical powertrain topologies that are likely to be encountered.

Powertrain topologies
A basic understanding of Hybrid Powertrain topologies and configurations is useful knowledge for anyone involved in discussing Automotive Technology topics. When combining an ICE with an Electric propulsion system, then there are effectively 2 systems that need to be considered, plus a complete overview of the the Powertrain (with 5 elements - Engine, Transmission, Battery, Electric Motor, Control system). An overview of the main configurations is discussed as follows:

Micro-Hybrid (Start-stop)
The micro-hybrid system was and is a low-cost entry to provide some level of electrification for the powertrain, in order to reduce tailpipe emissions. The system does this mainly by providing a seamless start-stop capability such that the engine can be easily shut-off - and re-started quickly – to prevent pollution during idling conditions, or when the vehicle is stationary. This can be done via an electric machine coupled to the engine front end accessory drive system (FEAD). Typically, the size of the electrical machine is less than 5 kW, operating at the system voltage level (nominal 12-volts for passenger vehicles) with a powertrain efficiency gain in the region of 3%. A lower cost alternative is to use the vehicle existing starter motor to provide engine start-stop. In this case the implementation costs are low – as only a control system is required to monitor and execute starting/stopping of the engine, along with a starter motor and battery capable of a duty cycle with many more staring operations when compared to a standard vehicle.

Mild Hybrid
The next step beyond micro-hybrid is to provide a system that is capable of greater power density to provide electric traction support and energy recovery. In order to gain increased power density, the system voltage level must be increased to maintain electrical current flow and distribution at a manageable level (cost and packaging). Therefore, a 48-volt system energy storage and supply system is integrated along with the existing 12-volt system to provide the traction power. This allows a power density increase in the range of 10 to 20 kW with a potential fuel consumption (and CO2) saving in the region of 13 to 22%.

Mild hybrid concepts are relatively simple to integrate and allow provision of an electrification concept for an existing vehicle platform - where significant architectural changes to the body and electrical system cannot be undertaken due to development cost limitations. The system is generally relatively low mass so the impact on the total weight of the vehicle is limited. The voltage and power levels are below critical limits which could impact on the required homologation and legislation testing the vehicle. The overall system cost to performance ratio (fuel efficiency, torque boost) is very competitive. The main topologies are as follows:

P0 - Consists of a belt driven started generator, driving the engine via the FEAD. The e-machine can typically provide additional torque in the range of 50Nm with a power density in the range of 15kW maximum. Fuel efficiency gains in the range of 7 to 12% are possible (depending upon drive cycle) This configuration has low cost of implementation but is limited as it cannot provide electric only traction – and recuperation is limited due to engine losses that are not de-coupled. The power transfer capability is limited by the capacity of the belt drive, which also creates NVH problems to for Engineers to solve.

P1 – This configuration places the electric machine directly into the driveline, at the engine flywheel. Maximum torque is increased to about 35Nm with power density in the range of 10kW. This configuration is more disruptive and requires re-engineering of the existing vehicle architecture. Boosting and recuperation capability is greater that P0 and system efficiency is higher as there are no belt drive or transmission losses. The electrical machine can provide torque boosting – and load point shifting (in order to operate the IC engine in the most efficient load-speed point). The device can also be used for engine starting so that low voltage starter motor can be removed. Electrical only propulsion is not possible and due to the high implementation costs, the price/performance ratio of this concept is low – as such this concept has been superseded mainly by the P2 and other concepts.

P2 – This configuration is similar to P1 apart from the fact that the electric machine can be de-coupled from the engine via an integrated clutch. This brings the benefit of the possibility of electric only traction, and removal of engine related parasitic losses such that maximum efficiency can be gained. Torque levels of up to 50Nm are possible with maximum Power densities around 21kW. Overall fuel efficiency gains are high – up to 15 to 20% are possible. The downside is that this concept has a significant impact on the vehicle architecture – and componentry is more expensive than the previous concepts (P0, P1). 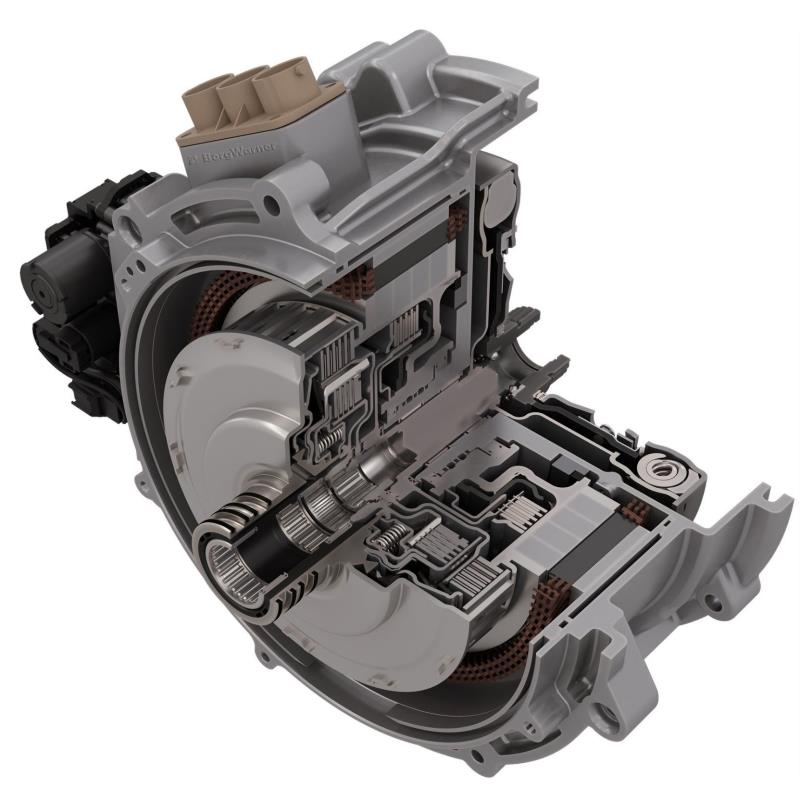 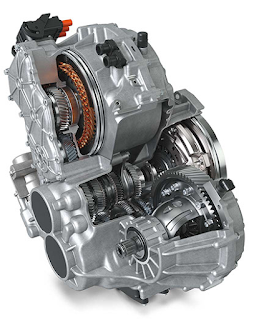 
P4 – The electric machine is located in the rear axle providing a separate electric only traction system. Performance and cost implications are similar to P2/P3 but the axle based location allows for the possibility of improved driving dynamics through torque vectoring and all-wheel drive functionality. Note that this module is applicable to BEV applications, as well as hybrid applications (in conjunction with a combustion engine). It is a popular layout for SUV hybrid power trains as it can provide a mild-hybrid AWD concept easily for an existing vehicle layout. 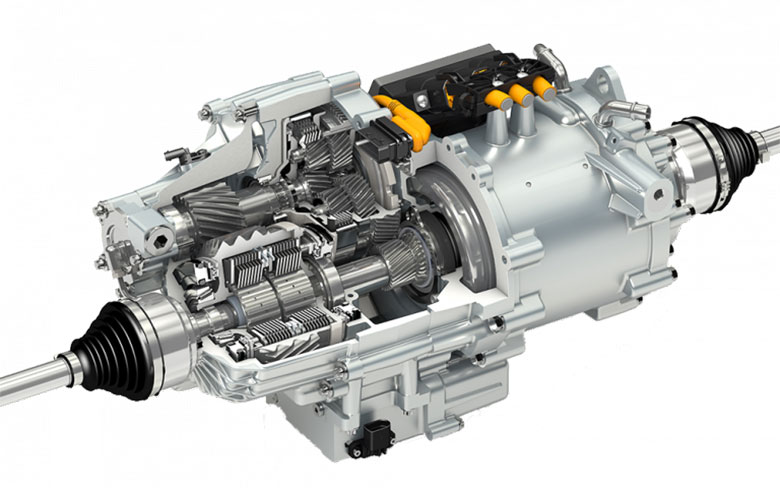 
P5 – A more recent classification and development based on the availability of wheel-based motors. The electric machine is located directly at the wheel hub. This has some advantages with respect to packaging - however unsprung weight is an issue and durability has yet to be proven over many vehicle lifetimes. It is very promising technology though as it can be integrated easily into an existing vehicle architecture and provides a very compact and efficient package (minimal losses), with the capability of advanced features for driver assistance (torque vectoring, stability assistance). In-wheel motors are applicable to hybrid and BEV applications


There are many technical solutions to the electrification of a powertrain and much depends upon whether an existing vehicle architecture is to be upgraded, or whether a new vehicle design is being created. Some technologies are already dated (P1,ISG) and some have yet to be proven (Wheel motors). However, it is an interesting time for Powertrain propulsion system technologies, the decline of diesel for passenger cars along with the hype around full electric propulsion means that the leading technology is unclear at the moment - and a combination of technologies is the most likely outcome (IEC + Electric).
Posted by Dave Rogers at 10:19 No comments:

Mahle is pushing the boundaries of achievable efficiency for spark ignition engines with the use of its Jet Ignition system - which is evolving quickly as a leading technology enabler to reduce emissions even further for next generation of engines. Mahle has already used Jet Ignition combustion concepts successfully in high-performance engines with a different development focus - but impressive results!

The available Jet ignition concepts developed by Mahle are classified as passive and active -  Passive using a ‘passive’ pre-chamber technology to improve burn rates and reduce the likelihood of detonation. The passive design does not use a secondary injector and takes its combustion charge from the main chamber during the compression stroke. The passive system has demonstrated in race engine applications, a very high EGR (Exhaust Gas Recirculation) tolerance, so at engine operating points where Lambda 1 if the target AFR (Air-Fuel Ratio) setting, it allows operation at relatively high levels of EGR at high load. This helps to reduce the possibility of engine knock at heightened compression ratios. This allows the possibility to extending the compression ratio and benefit from the increased cycle efficiency.

The active concept contains both a small spark plug and a low-flow direct-injecting fuel injector in a pre-chamber capsule. The active jet ignition is proposed by Mahle as the potential “ultra-high efficiency” application. The system operates by employing the secondary injector to maintain an easily ignitable charge inside the pre-chamber. This allows the system to exceed the established flammability limits in the main combustion chamber, reaching a Lambda value greater than 1.5. The main chamber is operated at this level which is actually close to diesel air-fuel ratios (AFRs), at which point, flame temperatures are sufficiently low to mitigate any NOx generation that might occur with richer operation.

Both active and passive versions of this pre-chamber technology are in general the same with regard to combustion principle: as both benefit from an outgoing turbulent radical jet, forced from the pre-chamber, which ignites the main chamber charge; this has the effect of amplifying the available ignition energy, thus delivering stronger and more reliable combustion in the main chamber - from multiple ignition sites and with fast burn rates.

It may seem a relatively simple system - but its complexity and attainment of required refinement should is a considerable task. However, advances in direct-injection gasoline systems’ flexibility and with careful consideration of pre-chamber geometry and nozzle selection - Mahle believes this technology is a key to significant powertrain efficiency gains - in terms of fuel consumption (easily rivaling diesel figures) together with reduced gaseous emissions.

Pre-chamber technology is not new; it has been used for decades in diesel engines (but now old technology - replaced by direct injection, common rail diesel technology) and Honda introduced it in the early 1970s for the first-generation Civic’s 4-cyl. spark-ignition gasoline engine, calling it CVCC (Compound Vortex Controlled Combustion).

Development testing has shown that NOx emissions were below 100 ppm (parts per million) at ultra-lean conditions are achievable in anticipation of Euro 7 targets. Used in conjunction with further technical improvements in friction, available coating technologies and charge management - a potential of 45% brake thermal efficiency has been demonstrated by Mahle. In summary - could this technology allow a gasoline engine to achieve the fuel consumption of a diesel? Mahle stated they have achieved this already - and that by combining downsizing, Jet ignition technology and a 48V hybrid system could deliver even better results.